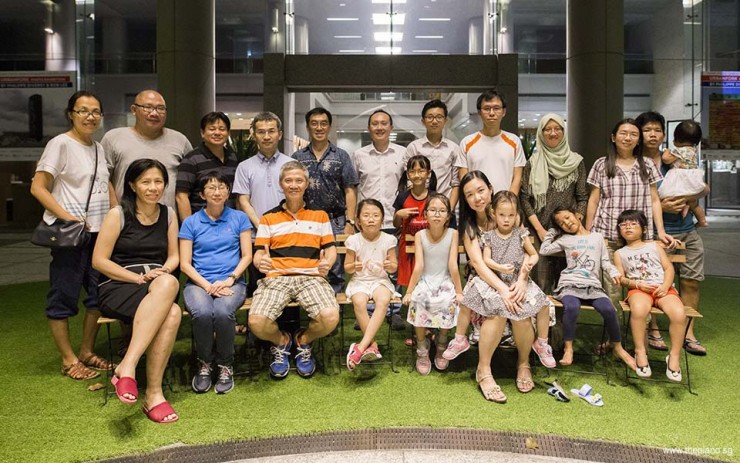 The URA Centre was abuzz with activity on a Sunday evening again. Every Sunday, without fail, passionate piano lovers – affectionately known as Pianovers – converge here to meet, gather and bond over piano playing. Here, two refurbished upright pianos, placed here as part of the Play It Forward Singapore community project, sit ready for passionate pianists to lay their hands on their keys.

Known as Pianovers Meetup, this weekly session organised by ThePiano.SG offers a platform for pianists to come together to perform and get to know each other. Even people who cannot play but love to listen to music are welcome to join in. It is really heartening to see people of all ages and coming from all walks of life coming together weekly. Some even return with families and friends in subsequent Meetups!

The Meetups start at 5pm, and this evening, the early birds included Pat, Chris and Yuxin. Yuxin was attending for the first time, and he was to amaze us later as he would be playing too! Together with ThePiano.SG’s Founder Sng Yong Meng, the group left for dinner at Maxwell Road Food Centre. Over a delicious dinner, old bonds were reinforced and new bonds created!

Back at The URA Centre, the dinner group was now joined by more Pianovers. Regulars like Albert and Siew Tin were present, as were May Ling and Helen. Helen came with her husband, as well as their children Grace, who would play later, and Sean. We were happy to see a new family this evening! Jacelyn arrived with her parents. Unfortunately, they had to leave after the Mini-Recital and missed the group photograph.

The first item of the evening was a Mini-Recital. In this session, Pianovers register for slots in which to perform to all present. This is always a proud moment for these pianists, who may not otherwise have a platform in which to showcase their talents.

Today’s Mini-Recital began with Isao performing Laputa and Kiki's Delivery Service, which were both composed by Joe Hisaishi, and used in films of the same titles by Studio Ghibli. While Laputa follows the adventure of a young boy and girl searching for a legendary floating castle while preventing a magic crystal from falling into the wrong hands, Kiki's Delivery Service centres on a young witch, Kiki, who uses her flying ability to earn a living after moving to a new town.

Next up was 16-year-old Wei Yuxin, who was not only attending the Meetup for the first time but performing as well. Yuxin delivered Nocturne in C# minor, Op. Post. and Waltz in D-flat major, Op. 64, No. 1 (Minute Waltz) by Chopin. The former was dedicated by Chopin to his sister, Ludwika Chopin, as an exercise before she began to study his second Concerto. There is a history to this piece as well. This nocturne was also famously played by Holocaust survivor Natalia Karp, who was sent to a Nazi concentration camp after the death of her husband in a bomb raid in 1943. Amon Göth, the commandant, ordered her to play for him on his birthday and was very impressed by her performance of this nocturne. He spared both her and her sister's lives.

Siew Tin entertained us with a very popular 你怎么说, written by 司马亮, and famously sang by 邓丽君 (Teresa Teng) who passed away 22 years ago. Jay Chou, in his 2013 concert, "sang" a duet with Teresa Teng. In that concert, Teresa’s old video was shown on the big screen with the help of modern technology, which helped to bring the famous lady singer to life!

Jenny took to the stage with her original composition Tenderly, and played duets with her daughter I-Wen - Hot Cross Buns, Come and Play With Us, and Good Morning Song. It was heartwarming to see mother and daugher playing together. This endearing performance was given an extra dose of warmth when Jenny's husband recorded a video of the duo playing!

Young Pianover Grace Pang performed Sonata in A, Kp. 323 (L. 95). This piece was written by Scarlatti, who was born in 1685, along with famous composers J.S. Bach and Handel. This sonata is also compiled in the ABRSM Piano 2017-2018 Grade 5 Exam Syllabus.

Since he first performed in Meetup #21, Albert has been sharing with us popular Chinese classics in his times. Today, he did not disappoint, and added "送君" by 严华 , and "梦里相思" by 王福龄 to his impressive list of 33 pieces to date.

Lynn Dee and Lang Vui joined hands to entertain us with My Heart Will Go On by James Horner. Composed for the movie "Titanic", it has gained widespread popularity since 1997 and is now included in the list of Songs of the Century by the Recording Industry Association of America and the National Endowment for the Arts. Its original singer, Celine Dion, performed the song again on 21 May 2017 at the 2017 Billboard Music Awards to honour the 20th Anniversary of Titanic.

Mentari's choice of Französisches Liedchen ("Old French Song") is the 16th piece from the Children's Album Op. 39. Tchaikovsky completed this cycle of 24 pieces in the summer of 1878.

The third duet of the evening came from Chris and Yong Meng, who played the 1825 piece Ave Maria (Bach/Gounod) by Franz Schubert. Originally titled "Ellen’s Third Song", the opening line of the piece (Latin for "Hail Mary”) is said to have led to the adaptation of the traditional Roman Catholic prayer "Ave Maria". The two songs have become so entwined with each other that it is often mistaken that Schubert wrote the Latin “Ave Maria”.

Desiree mesmerised us with Träumerei by Robert Schumann. It is the 7th movement in his set of thirteen pieces of music for the piano, written in 1838 - Kinderszenen, Op. 15. It is also the best-known piece - it is used in the opening and closing musical theme of the 1947 Hollywood film Song of Love, and the title of a 1944 German biographical film on Schumann.

Sharisse, who came with her parents for the first time, played three short pieces - Perfect Posture, Baa Baa Black Sheep, and Oh My Darling, Clementine. At Pianovers Meetups, we frequently have children joining us and we are very happy to have them around. We believe that growing up should not be just about classroom-based learning. Children should be exposed to other environments and learn from beyond their textbooks. It also helps that they gain confidence performing in public and make new friends along the way!

Concluding the Mini-Recital was Gee Yong's 你好不好 by 周兴哲 . He shared that his friends had jokingly commented that he always played "old" songs, and this spurred him to challenge himself to do a cover of a more recent piece instead. Kudos, Gee Yong, for the effort!

Following the Mini-Recital was the Open Segment, during which Pianovers play freely on the two pianos in no pre-set order. As Pianovers play, other Pianovers take the opportunity to interact and exchange tips about piano-playing. Today, one of the conversations that took place was that between Chris and the teenager Yuxin. Sharing openly and with a genuine heart is one of the aims of the Meetup, where we want to see build a community of piano lovers.

All too soon, the Open Segment ended and all Pianovers took a group photograph before leaving for the night. Another Pianovers Meetup had come to an end.

Pianovers will be happy to know that ThePiano.SG will be holding its very first recital event. To be held on 20 August 2017, 7pm-9pm at 10 Square @ Orchard Central, the aptly-named Pianovers Recital brings Pianovers Meetup to a whole new level. Pianovers Recital celebrates the First Anniversary of Pianovers Meetup and is our way of thanking all Pianovers for walking the journey together with us. Pianists will be on stage, performing in a true recital environment. The instrument of the evening accompanying the pianists will be a Schimmel grand piano.

All Pianovers who have been with us at The URA Centre over the past year are welcome to join us this evening to support these aspiring piansts. Non-Pianovers are also welcome, too! The Performer Tickets were sold out in less than 24 hours, and we are extremely excited to know what pieces the performers would be playing. Stay tuned!

10 Square @ Orchard Central is run by The RICE Company Limited (TRCL), a non-profit organisation dedicated to promoting the development of human lives and connecting communities locally. Please support ThePiano.SG in helping other members of our community.

See you all at Pianovers Recital, as well as next Sunday’s Pianovers Meetup!

This is the mark of a really admirable man: steadfastness in the face of trouble.