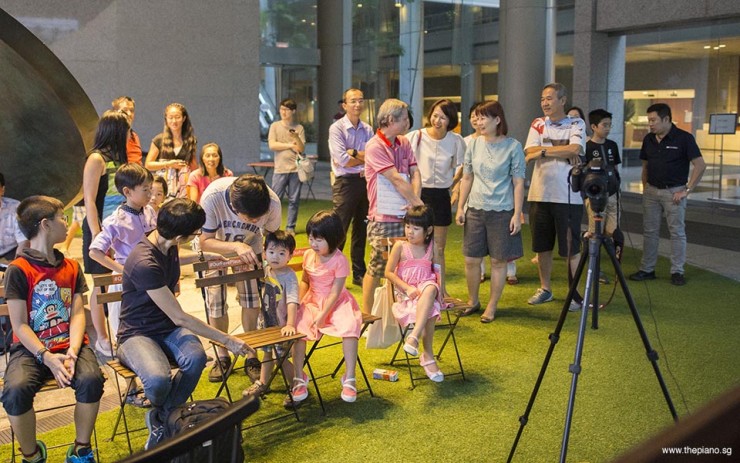 What a big turnout it was this week at the Pianovers Meetup! Piano lovers from all walks of life showed up at The URA Centre to boost the local piano community. Zafri, Ace, and Siew Tin joined Yong Meng for dinner at Maxwell.

After having their tummies filled, it was time to satisfy the musical appetites of everyone present, including those back at The URA Centre. Among them were Peter Prem, Jimmy, Cynthia, Yu Tong, and Karen, Corrine and Yun Wei, Vanessa and Mitchell, Gerald and Wenqing, Albert, Shu Wen (piano teacher) and her parents, Eng Wee and family, Wing Wa and family, Jinny and family, Jaime and family, George and his parents, Chris, Gee Yong, and Jerome. Newcomers included Zhi Yuan, Karen and Yu Heng, as well as PH. Particularly interesting was the number of kids that were present that night. It was indeed a family affair!

The Registered Players Segment started promptly, with the kids having a go on the piano. They performed many of the practice songs from their piano classes, charming everyone in the audience.

One of the kids, Cheng Leng, played two short pieces French Fry Bandit and Hush a Bye. Her mother Jaime was up next and played 喜欢你 by 梁文福. The song is known more popularly by Singaporean Singer 陈洁仪 (Kit Chan) in her 1996 album 伤心 (Sadness).

Jun Theng played the second French Fry Bandit piece of the night. Mother and son duo, Jinny and Heok Hwa, played a Shave and a Haircut duet. Jinny then took a turn solo on the piano and treated us to Part of Your World by Alan Menken from the 1989 Disney animated feature film, “The Little Mermaid”, in which the protagonist wants to be a human.

Wing Wa is a true testament that learning simply has no age, as he had only just picked up piano upon watching his daughter play. He performed the number Pretty Bouquet. This was followed by his daughter playing Little Red Shoe, and Lavender's Blue from the Disney movie “Cinderella”. The song backgrounds two important scenes in the movie; first when it was being sung to young Cinderella by her mother, and second was sung by Cinderella herself when her stepmother locks her in her room.

Chris played When All The Tears Have Dried by Dick Lee, from a Singapore produced musical "Sing to the Dawn" in 1996. "Sing to the Dawn" was derived from a short story in Minfong Ho and later made into a full length novel. It was awarded first prize by the Council of Interracial Books for Children in New York City in 1975.

George played Sundial Dreams by Kevin Kern, who was in Singapore last year . Yu Heng played Wheels on the Bus, by Verna Hills in 1939.

Zhi Yuan played Sonata in C, K. 545, Movement 2 by Mozart. The piece was described by Mozart himself as being "for beginners” in his thematic catalog. It is also sometimes known by the nickname Sonata facile or Sonata semplice.

Zafri played Imperial March by John Williams from the popular Star Wars movie franchise. Composed for “Star Wars: The Empire Strikes Back”, it is an example of a “leitmotif” – a recurrent theme associated with characters or events in a drama.

Ace played My Dearest, by Ryo (Supercell). First sung in Episode 2 by Supercell, it is part of the official opening theme for "Guilty Crown”, the anime series.

Jerome covered a number made popular by Rod Stewart in 1996, Sometimes When We Touch. The original song is by Barry Mann in 1977.

After the Registered Players Segment, the group gathered together for the biggest group photo of 45 Pianovers ever taken since The Pianovers Meetup began. During the Open Segment, the kids were seen clamouring for the piano, eager to have a turn playing. Shu Wen had generously bought “Yan Yan” snacks and gave it out to all the kids, who were positively thrilled to be receiving a treat. She was also seen taking pictures with her piano students. Peter Prem, who had been away from the meetings, was seen back, much to everyone's delight. Gerald, Wenqing, and Albert were seen having a good chat during the Open Segment. The night was thus concluded with a record number of Pianovers attending, and exciting performances from all participants! Till next time!

It's easy enough to foist your music collection on your kids. Lectures are not required; you just play the stuff while they are prisoner in the back seat on a long drive, or softly in the background while eating dinner.