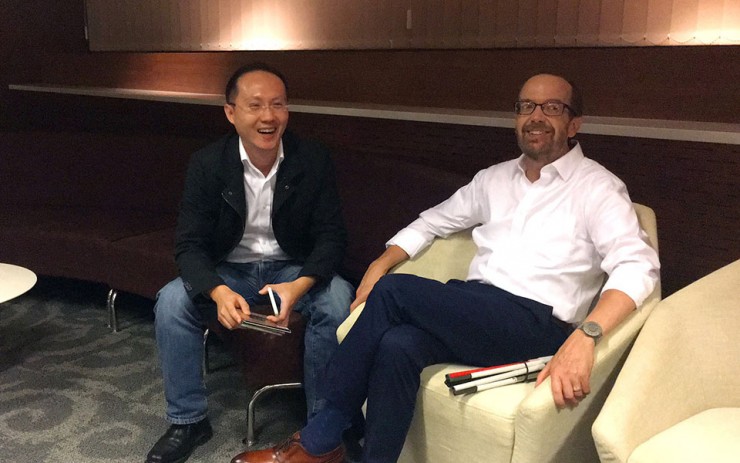 ThePiano.SG is proud to present the following interview with acclaimed performer Kevin Kern. Kevin, born Kevin Lark Gibbs on December 22, 1958, in Detroit, Michigan, is an American pianist and composer. He is generally recognised as a representative of the new-age style of music. Born legally blind, Kern is aided in the studio by SONAR’s accessibility and Dancing Dots’ assistive music technologies for the visually impaired.

Kevin was found playing "Silent Night" on the piano at 18 months of age. He started learning the piano regularly at 4 and began writing music at 8. At 14, he put on performances with the music group he founded called "The Well-Tempered Clavichord". Despite his legal blindness since birth, he was still determined to become a pianist.

Fortunately, his prodigious talent and zest for music could not be contained. Today, he is an accomplished recording artist with more than ten albums to his name. In fact, to celebrate the 20th Anniversary of his legendary New Age debut album "In The Enchanted Garden", and the release of his latest album "When I Remember", Kevin has held a concert here on the 10th of September, 2016, at 8pm, at the Star Theatre, giving Singapore the big honour of becoming the first country in which he performed his latest album pieces live.

True to form, the concert did not disappoint. Kevin delivered piece after stunning piece from his most recent collection, serenading and delighting his audience. He even found time in between pieces to explain to listeners the inspiration and creative process behind his works. The concert was made even more memorable through a special segment where the lights in the concert hall were switched off and it became pitch black. Kevin welcomed us to his world of visual impairment, and invited us to listen as he played in the dark. It is rare for artists to completely turn off the lights. This heightens our hearing senses, and builds up a unique experience.

We had a chance to interview Kevin after his successful concert, and were joined by his lovely wife, Pamela Gibbs, who, like her husband, has a very friendly personality. The contents of the interview are given below, with as little amendment as possible, in order to preserve the original tone and emotion of the speakers.

Participants of the interview:

YM: You have no idea how much I look forward to meeting you. I was only 17 years old when you debuted with "In The Enchanted Gardens"! And you know, at that time, Sundial Dreams was played all over Singapore's MRT stations.

YM: That was exactly when I was very inspired by your pieces. And I played a lot of them. Now that I've set up a website portal dedicated to bringing people in the piano community together, I look forward to meeting you even more.

PM: Tell us more about your blog.

YM: I write a lot of articles about piano and music. And I draw my inspirations from my experiences as a piano teacher. When I was young, I played a lot, and when I first heard Sundial Dreams in the MRT stations, I knew I had to get a copy of the songbook, and learn that piece!

PM: We have to thank whoever in the MRT was responsible for broadcasting the song!

YM: Now that Sundial Dreams has been associated with your name so much, if someone were to play this piece, how would you suggest him to frame his mind before playing it?

YM: Yes, I noticed that from your songbook - 6 flats, and that was also a difficulty that most students have when they are trying to learn this piece.

KK: Oh yeah, trust me, I have been hassled about that the world over for two decades.

YM: Just now, I heard you play your pieces from your latest release. What was it that inspired you to come up with the piece "When I Remember", which is also the title of your album.

KK: Okay, you play, right? So you understand music at a somewhat technical level. Are you familiar with the concept of modal and sequence?

KK: Okay, there you go! Michel Legrand is a master of modal and sequence.

KK: See how he used that same idea 3 times until it's done? He didn't invent it. It's a concept that goes back to the Renaissance, but he made it his signature device, and I love it! So, there you go.

YM: I realised that you have shifted to your own label in the year 2012.

YM: Does that expand your possibilities in creating music for your audience?

KK: Phew... You bet! Absolutely it does! Because now, you know, it's a highly speculative investment, you know. But, when there is no greater thing, than being able to say, this is what I need to do, for myself. And you have no idea how I am emotionally hoping that my audience comes along with me. And I get the sense that they will.

The initial response to the record has been everything I hoped for and all, and I'm very inspired and encouraged, and the generosity and the spirit that my audience seems to be showing me, in the correspondences we have received from fans all around the world, and just as I can feel the response of the audience tonight as I played the music, and explained it. And you know, they are like, we are behind you, we love you, and we're going to take care of you.

YM: Definitely! I heard a lot of people saying that it was a fantastic concert after it ended, as they were leaving. So I guess that is a very big compliment to your successful concert tonight.

KK: Yeah, I’m very excited. I wanted to come back here, you know. I'm sorry that I've been gone for 6 years. That's just wrong. I won't let it happen again.

YM: I remember the last time you came, there was a Kevin Kern piano competition.

YM: Actually, when you announced that you were coming back to Singapore, a lot of your fans were actually looking forward to one more such competition.

KK: Well, hopefully we will do it again. I'd love to do it again. It happens that this album "When I Remember" has a companion songbook, like what "Enchanted Garden" had. And I'm hoping that piano playing fans around the world will give it the same love and support that "Enchanted Garden" had, and people will enjoy playing this music as much as they enjoyed playing my best-known music, because I really feel like the music in this collection is the logical progression from where I started to where I should be.

In the case of The Beatles, "I Want to Hold Your Hand" sounds nothing like "Sgt. Pepper".

And Duke Ellington, "Main Stem", sounds nothing like "Satin Doll" and "Queen's Suite".

YM: And I think you have done it very well. Over the years, as I grow with you, since your debut in 1996, until now, we have seen how your music has progressed and has always continued to inspire us further.

KK: Well, I started to play the piano when I was a year-and-a-half. And the reason why that is important, is because I literally cannot remember a time when I couldn't play the piano, when I couldn't make music, create music through the piano. And particularly when I started making these records, so much of the skeleton of the early recordings depended on spontaneous improvisations that came out on the piano. And nothing inspires that kind of instant creativity like a piano that you can talk to, that gets you. And that's unique about the best Steinway I have known, that quality that instantly inspires that rapport. To be identified with an instrument that has been such an integral part of my creativity, is something that I will always be very proud of.

Kevin has been kind enough to share the pictures of our interview on his personal Facebook page. His latest album "When I Remember" was released on 9 September 2016. If you pre-order it from his online store (the window for pre-orders is still open), you can save 20% off its original price. Also available for sale at a discount is the companion songbook for the album. This offer expires on 30 September, 2016.