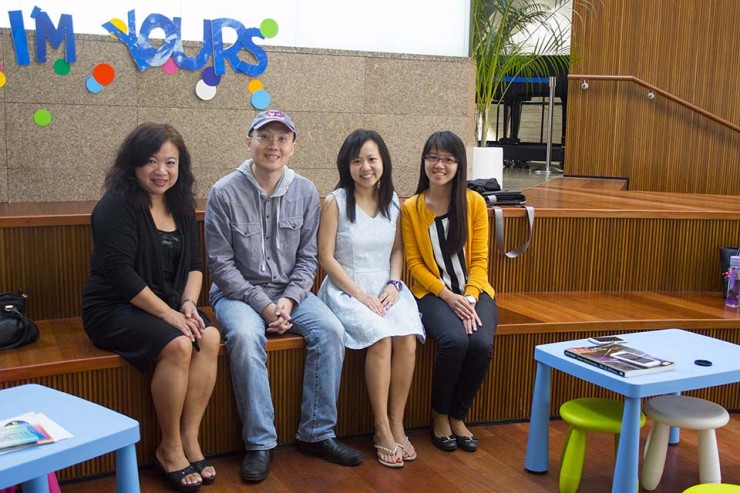 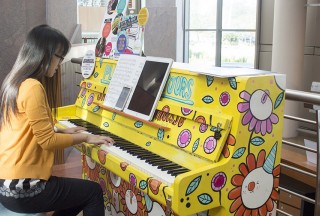 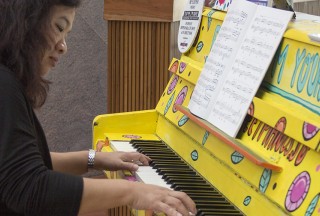 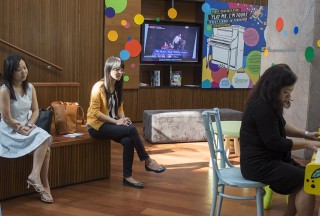 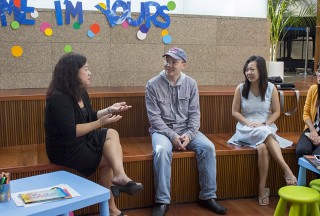 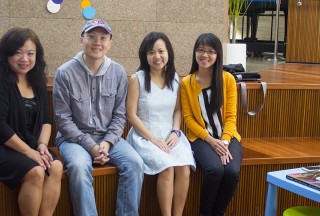 Albert Einstein once said “I often think in music. I live my daydreams in music. I see my life in terms of music.” Indeed, music fills our lives and builds dreams for many.

ThePiano.SG held its second piano teachers’ gathering on 6 June 2016 at The Esplanade. Chasing away the Monday blues with music and laughter were Sng Yong Meng (Director of ThePiano.SG), Pauline Tan, Serene Chew and Liew Hui Jie.

As the piano teachers converged at the Esplanade from different directions, pianos installed under the Play Me, I’m Yours project, started by artist Luke Jerram in 2008, were spotted at various locations in town. One was seen at Citylink, while another was discovered in the unlikely location of the Esplanade’s carpark!

While the first gathering in May 2016 was an introductory and informal session for the participating piano teachers to get to know one other over dinner, the second gathering was musically in tune with the vision of ThePiano.SG and aptly held at the Festival Corner in The Esplanade.

Starting the meeting on a cherry note, the piano teachers wasted no time in taking to the piano and playing their much-loved pieces of music. Songs played that morning included pure and soulful piano pieces such as American new age-pianist Kevin Kern’s Sundial Dreams, Don Moen’s Give Thanks (With a Grateful Heart), Henry Mancini’s Moon River, Luiz Bonfa’s Samba de Orfeu, Final Fantasy Nine’s Melodies of Life and Disney Pocahontas’ Colours of the Wind.

It was a lovely morning of music appreciation by a group of piano teachers madly in love with the piano. Amidst the melodious backdrop, many smiles and joy were exchanged and captured in photos and videos, taken by the teachers as well as an appreciative tourist who walked by.

The topic of solfège, and the Moveable Do versus Fixed Do, came up for discussion. All unanimously agreed that solfège, otherwise known as sounds recognition, is crucial to all piano learners. Young children have an advantage in learning music through solfège, due to their sharp sense of hearing and untainted appreciation of sounds.

Serene shared on some simple improvisations and how pianists have to be sensitive to the audience that they are playing to, so that the improvisations cannot be too “wild” and stay respectful to the original song while having a fresh feel to it. For example, many churchgoers might be sensitive to the songs which have been improvised so heavily that they do not feel familiar anymore, while some might prefer a fresh perspective to the same songs that have been heard many times over. Thus, church pianists have to be mindful of the feelings of churchgoers.

Another topic that was discussed related to the fact that piano teachers put in countless hours behind the scenes when imparting their skills to their students. For example, piano teachers could spend hidden hours transcribing songs to a simpler level for students who are just starting to learn the piano, so that they can easily play their favourite piano pieces as a motivation to continue their journey of piano learning. All the piano teachers present firmly believed in inculcating into their students the love for and appreciation of music, instead of focusing on piano examinations, which is what most piano teachers do.

The Singapore piano teachers had lunch at Toast Box to refuel themselves after three hours of discussions and piano playing. Wrapping up the gathering, the piano teachers said their goodbyes with a thought-inspiring quote – “The piano is probably one of the few musical instruments that requires the player to read the grand staff and co-ordinate both hands and legs – the whole body, basically”.

The grand staff refers to the set of treble clef and bass clef. Reading the grand staff means having to read both the left and and the right hand concurrently. Other musical instruments only require the player to read either the treble clef or bass clef, not both the clefs together.

While the piano is decked in black and white, the music it plays sounds like a million colours. If you are passionate about piano and teaching, find out more about the piano teacher membership and join in the next gathering.

Distance doesn't exist, in fact, and neither does time. Vibrations from love or music can be felt everywhere, at all times.