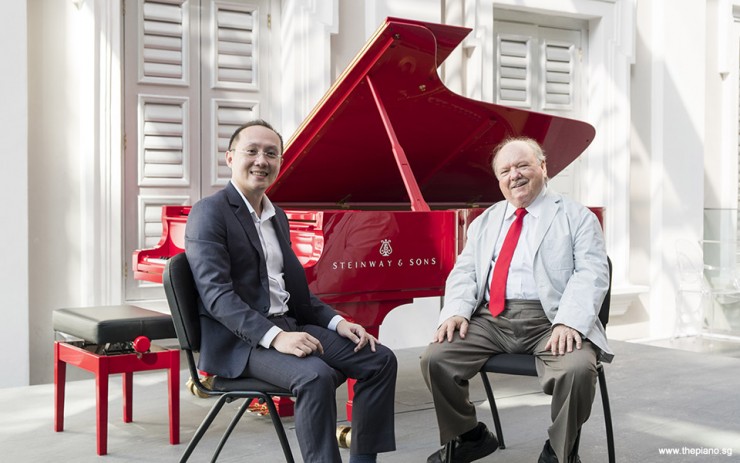 Renowned Steinway artist John Perry, who last visited Singapore six years ago, is here again. Mr. Perry, distinguished artist and teacher, earned his bachelor’s and master’s degrees at the Eastman School of Music where he was a student of Cecile Genhart. During those summers, he worked with the eminent Frank Mannheimer. Recipient of a Fulbright Scholarship, he continued studies in Europe for four years where he worked with Wladyslav Kedra, Polish concert artist and professor at the Akademie für Musik in Vienna, and Carlo Zecchi, renowned conductor, pianist, and head of the piano department at the Santa Cecilia Academy of Music in Rome.

Here is the transcript of the interview.

1. How would you advise a student to perform: Closest to the composer's original intent or according to his own interpretation?

This is not an either-or situation. It is not a choice. One must follow the score relentlessly and also imbue the performance with one’s own ideas and personality. An inability to be personal and yet do what the composer asks is usually indicative of lack of sufficient talent or arrogance or both.

2. In Singapore, piano master classes are not common to many piano students. Most have never attended any, do not understand their significance, feel they’re expensive to participate and wonder if they’re worth their time. How would you educate and/or advise these students?

In old Europe, there were not individual private lessons. Everything was taught in small groups. The reason is that one learns so much more when one observes the teaching and one is not involved in the playing at the same time. Also, it is very good for the student to hear another way of explaining even if the opinion is identical to that of the regular teacher. Another good reason for master classes is that it puts the student on edge just as if it is a recital if not even more so. This increases the chances of better preparation and hardens the student in preparation for the stresses of live performance.

3. In recent years, the number of "Piano Master Class" videos uploaded on the YouTube has been on the rise. What do you think of this phenomenon?

I have been asked to do this since twenty years ago, long before it became popoular, and I have always refused. It would be too likely that people would regard the decisions made in the video master class as binding and somehow related to the truth. Every person is going to bring something of their own to the table, and the teacher is going to go from that point forward. This simply cannot be copied from one person to the next.

4. If there was a catastrophe where all piano scores and recordings would be destroyed, and you have the chance to save just one piece; which would it be, and why?

5. You have travelled around the world widely and seen many piano students and pianists. Where do you think Singapore stands currently, and what it can possibly do to build a better environment to discover, nurture, develop the current and future generations of pianists?

This is my second time that I have been in Singapore. I would not be so bold as to make a statement on the general environment of music in Singapore, but I will say that Singapore, considering its population, does more than hold its own on the world stage. There are outstanding young students from Singapore all over the world and that is a great tribute to the standard of musical education in Singapore.

6.(i) I understand that you are planning to use the Steinway Spirio in your upcoming Recital Lecture. What motivates you?

I have never used it before in such a setting and I find it exciting and challenging. It is wonderful to actually hear the piano played acoustically and I am sure that the number of repertoire possibilities will increase constantly in the future.

(ii) How do you think the Spirio, with its various legendary artistes' pieces in the iPad, could help in making the lessons more effective, compared to the traditional way of teaching with a standard Steinway and a solo teacher?

Any additional information and any additional tool is helpful in any field of endeavour. It is wonderful to actually hear the piano instead of the piano through speakers. The danger is that people might simply use the performance as a template for copying the performance instead of working out their own interpretation. This copying has been much more of a problem since YouTube has become so popular. People might think that they are doing the same thing, but they never are because it has not come from within themselves. Copying performances is in music exactly the same as plagiarism is in writing original texts. However, with the Spirio, one is listening to the piano and not incredibly wanting computer speakers and earphones. The time to listen to a performance of someone else is just before beginning to work on the piece so that a general feeling of the music is absorbed and at the end AFTER a person’s interpretation has been established.

7. I understand you have been conferred as a Steinway Artist since 1979. What does it mean to you to be a Steinway artist?

It is a great honour.

John Perry’s Recital Lecture and Open Masterclass will be conducted on 7 September 2017. Steinway owners and ThePiano.SG Pianovers can enjoy an additional discount. Please email info@steinway-gallery.com.sg or call 6838 0525 to receive the special promo code.

No matter what is happening in life or in the world - war, natural disaster, poor health, pain, the death of loved ones - if existence is filled with art, music and literature, life will be fulfilling, a joy.