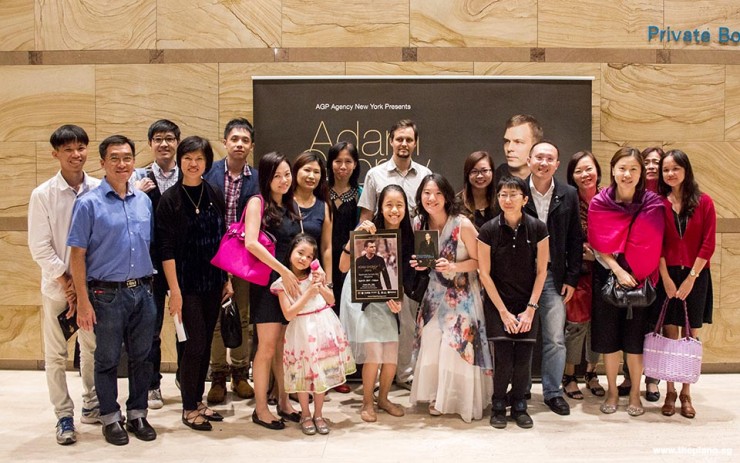 During Pianovers Meetup #33, Pianovers had a chance to come close to Adam Gyorgy, the well-renowned pianist from Hungary. The Steinway Artist and Lizst Ambassador had found out about ThePiano.SG’s Pianovers Meetups and took time off his busy schedule to grace this weekly event.

During the session, held at the URA Centre, Adam gave a 30-minute interview about what being a concert pianist meant to him. As Adam spoke, the Pianovers present were able to sense his passion for music. The insights Adam provided into his life as a musician and his attitude to life were invaluable. Pianovers were very fortunate to have been able to see him in person, right at a Pianovers Meetup! We at ThePiano.SG are very humbled that a pianist of global acclaim was able to reach out to Singapore’s budding piano community through our platform.

Pianovers were in for another treat when Adam gladly gave out pairs of tickets for his concert, held at the Esplanade Concert Hall on 21 April 2017 at 7:30pm. ThePiano.SG had conducted contests, known as Pianovers Giveaway #2 and Pianovers Giveaway #3, which saw overwhelming response. Not unexpectedly, the tickets were oversubscribed. 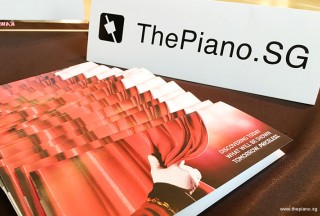 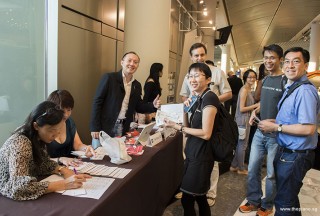 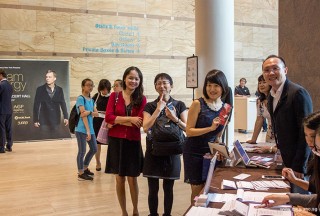 As the lucky winners converged on Esplanade Concert Hall on the concert evening, they found booths already set up at the entrance. There were booths from MS Works (the organiser), Juara (one of the the sponsors), the Hungarian Embassy in Singapore, as well as one from ThePiano.SG.

We are indeed happy to have been the community partner to Adam’s concert. Among others, Siew Tin, Maxim, Theng Beng, Chris, Audrey, Julia, May Ling and Joseph collected their tickets at the booth in great anticipation of seeing the pianist a second time. Not only did Yong Meng, Founder of ThePiano.SG, have photographs taken with Pianovers as they did their ticket collection, we also shared photographs with the hardworking staff from the neighbouring booths. Indeed, the giving away of free tickets showed that Pianovers are privy to a host of benefits. We at ThePiano.SG are always hard at work adding value to the community, and we enjoy this process of giving as much as you enjoy the benefits!

It was nice to meet Benjamin Loh, another Steinway Artist, at the concert. Benjamin had appeared at Meetup #33 to pick Adam as they left for their dinner appointment, and Pianovers might recall that that evening was the first time in ThePiano.SG’s history that two Steinway Artists had graced a Meetup concurrently.

Pianovers realised that they were in for yet another treat when they found themselves sitting in the parquet seats, separated from Adam Gyorgy by less than 10 metres! From this vantage point, Pianovers had an unbeatable view of Adam and his fingers as he played on the keyboard.

Adam’s concert was a one-hour programme with no intermission. Included in the pieces performed that evening were Adam Gyorgy’s improvisations, as well as Mazurkas by Chopin (Mazurka In C Sharp Minor Op. 6 No. 2, Mazurka In A Minor Op. 17 No. 4 and Nocturne In C Minor Op. 48 No. 2), Legend No. 2 by Franz Liszt, as well as another piece by Frederic Chopin, Scherzo No. 2.

ThePiano.SG and Pianovers thoroughly enjoyed the session. We could see how Adam put his mind and soul into this performance, which was clearly astounding. Even from the distance, all Pianovers present could see Adam perspiring as he navigated skillfully through the more technically-challenging compositions, and captivating the audience in the process!

Much to the delight of the audience, Adam obliged with three encores. Among them was Hungarian Rhapsody No. 2 by Liszt, which had the audience’s attention fixated on the stage. Adam ended the encore with his original composition A Day In New York, beautifully-visualised through his playing on a grand piano in the middle of New York City’s Grand Central Station.

It was an understatement to say that the attendees who were fortunate enough to be present that evening were totally engaged by Adam’s performance. This was even more so for Pianovers, who had the privilege of sitting in the parquet section. It was a very memorable moment indeed for Joseph, who was attending his very first classical concert.

Following the concert, Adam took time to have his pictures taken with his fans and obliging them with autographs. Even though the crowd was thick and it was a challenge to reach him, some Pianovers were blessed to have their chance. This was, after all, a bonus, as most Pianovers already had a chance to be up close and personal with this legendary figure during Meetup #33, in the peace and quiet of the URA Centre and away from the maddening crowds.

Eventually, Pianovers had to bid farewell to Adam and this splendid evening at the Esplanade Concert Hall, but not before taking a group photograph before Adam’s large standee. It was such a magical moment, being to attend this concert with a group of such well-dressed and passionate Pianovers.

Although the concert was over, Pianovers could not help but reminisce about the evening, as they made their way to Toast Box for a post-concert supper. It was another chance for Pianovers to bond and bind, and to share their views about music. We left only when Toast Box had to close for the night. It was another night well-spent with Pianovers, as they came together to thoroughly enjoy what they enjoyed most!