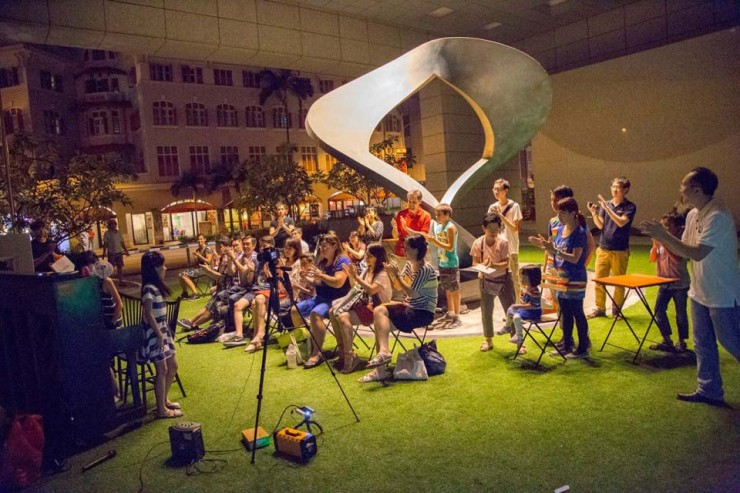 Last Sunday’s Pianovers Meetup was one of the most exciting meetings we’ve had to date. With a sizable turnout of about 30 people, it was the largest attendance the group had ever seen. Pianovers from all walks of life gathered for an evening under the roof of The URA Centre, laughing, singing and clapping along to another unforgettable night of wonderful music.

Starting the night early, Lynn arrived along with her two daughters at Tanjong Pagar MRT station to pick up friend and fellow piano enthusiast Catherine and her two kids, Elianna and Yan. All four of the young ones were thrilled to be scheduled to play in the registered players segment that night.

New faces Ho Ee Ann, cabin crew of SIA; Hyon, a Korean who has spent 3 years in Singapore though originally from Japan; and Marcus Tan, a Singaporean now based in the UK, were also there ahead of time to relish delicious local food. Dolce, who was present at Emma's Workshop, and the NUS Piano Ensemble Alumni Concert 2016, also made an appearance.

The group of ten made their way over to Maxwell Food Centre, where Chris Khoo joined them soon after, bringing up the number at that night’s dinner gathering to a dozen people.

Full from dinner but hungry for music, the company then strolled back to their usual spot at The URA Centre. Much to their surprise, there was a large collection of people already assembled in front of the two pianos, including a number of passersby. Everyone was excited, and especially with such a crowd gathered- the registered segment had never seen such a record number of pianists!

Chris Khoo, seasoned Pianist and a familiar face to the Pianovers Meetup, once again delighted the crowd with his choice of song, "Nessun Dorma (from Turandot)", a piece that brings back familiarity.

Ong played two numbers from the popular Jay Chou Movie: “The Secret” –  斗琴 No. 1 as well as the movie theme, in a duet with Stormie. Ong and Stormie set the stage perfectly for the 4 talented little ones, who displayed exactly what it means to be a Pianover, unafraid of performing in new environments; they were the true stars of the night.

Elianna played Theme, and Variation No. 5 from "Ah, vous dirai-je, Maman" (Twinkle Twinkle Little Star), and her brother, Yan, played Now is the month of Maying and Allegro, Sonatina in G Major.

Sisters Crystal and Claris, who had some public performing experience from taking part in events such as Bach in the Subways 2016, as well as the Play Me, I'm Yours tour, gave us one of the most noteworthy moments throughout all eleven Pianover Meetups when they played a spirited 4-handed rendition of Anitra's Dance by Edvard Grieg.

Another memorable moment arose when Jerome explained that his choice for his piece Oktober, from The Seasons by Tchaikovsky, was because it was in fact the month of October. This was promptly followed by jokes about having to play every other month since The Seasons has 12 pieces, one for each month!

Newcomer Hyon played Piano Sonata Op. 13 No. 8, Pathétique, II. Adagio cantabile, which seemed to have set the genre of the entire evening! Many of the pieces that were heard that night were classical pieces, a pleasant departure from the previous Meetups, where more popular songs dominated.

Another newcomer, Siew Jia Yong, a piano teacher, brought the crowd to a roaring applause with her own rendition of Moon River, certainly one for the folks who enjoy improvisation!

Maxim and his son, Gleb, played a song each –  Italian Concerto, II. Andante by Bach and Gaiamente: No. 3 from 12 Esquisses by Glier.

Joseph then brought us back in time with a nostalgic piece from 1989 梦醒时分, sung by 陈淑桦.

The registered segment was sweetly concluded by Marcus who played "Sayonara Memories", by Ryo.

It was no surprise, due to the sheer number of Pianovers who turned up, that many stayed behind for the open segment of the night. The entire space bustled with conversation and music; Marcus wowed us with Piano Sonata No 21, Op. 53, "Waldstein", III. Rondo, Maxim and Tim were caught improvising on the piano, and Siew Jia Yong was so touched by the initiative that she purchased the event’s polo shirt as a gesture of support for the Pianovers Meetup and the vision Yong Meng has for future Meetups.

The immense energy from the night permeated the space so much that many like Wenqing, Gerald, Joseph, Gee Yong stayed on to continue playing even after Yong Meng himself left the scene! Our beautiful group photo shows the impressive numbers despite not including everybody that turned up.

We look forward to seeing more of you at the twelfth Pianover Meetup, happening at a new venue this Sunday!