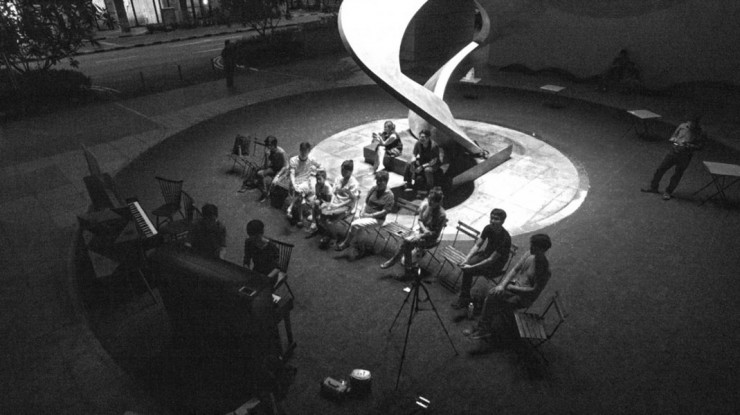 The weekly Pianovers Meetups started in July as a platform for piano lovers to meet, play and network. Every Sunday evening, without fail, a team of Pianovers (piano lovers) converges at the URA Centre, at the spot where two refurbished pianos have been left as part of the Play It Forward, Singapore’s initiative to place pianos around Singapore for the public’s enjoyment. Not only do regular faces attend every weekend, new faces visit too, if only out of curiosity. It is heartening to see the newcomers return the following weeks and become regulars themselves.

At the eighth gathering, held on 18 September 2016, four new faces appeared. If it was any indication that a newcomer was enthusiastic about Pianover Meetups, Benedict Lim arrived early, while ThePiano.SG founder Sng Yong Meng was still setting up his equipment. Benedict was soon joined by Hazel, who had just attended a tea course in the vicinity.

With the venue set up, the trio went for dinner at Maxwell Food Centre where they chatted and got to know one another. They returned to find newcomer Barrick Wong and his family, already waiting at the venue, in eager anticipation of the start of the gathering.

A fourth newcomer, Zachary Teo, arrived to join the gathering, where he played his original composition, "Do You Still Love Me?". Through his playing, Zachary seemed to allude to his mixed feelings and the sense of wanting to ask this very question to a girl.

A regular Pianover, Chris Khoo, played Dick Lee’s composition, "Another World". According to newcomer Hazel, this piece, from the musical Beauty World, moved her so much that she almost broke down.

Harith played "I Should Care", a song published in 1944 and originally performed by Axel Stordahl, Paul Weston and Sammy Cahn.

Regular Pianovers Meetup attendee and busker Joseph Lim, known for playing his Mandarin pop songs, played "知足" by 阿信 (五月天). Apparently, Joseph’s playing had members of the audience excited for they soon started humming along as he played.

Other enthusiastic participants kept the momentum of Mandarin pop going that evening. Ong played a medley of Taiwanese actor-singer Jay Chou’s songs, including several pieces that were featured in Jay’s movie The Secret.

Benedict Lim, the newcomer who had arrived early, surprised the others when he went forward to offer his rendition of Michael Wong’s (王光良) "童话 (Fairy Tale)". That a newcomer actually stepped up to play was a heartening achievement and something to celebrate.

Another Mandarin song that appeared in the airwaves that evening was "她说", originally performed by 林俊杰 (JJ Lin). Watching Jerome play with passion and enjoyment brought a smile to everyone’s heart, for this was in line with what ThePiano.SG and genuine piano lovers have been promulgating – to play with enjoyment and passion, and to spread the love of piano and music.

Barrick Wong, the newcomer who visited with his family, had initially been egged on by Ong and ready to play. However, shyness took the better of Barrick and he eventually abstained.

After the registered players’ segment, it was time for the open session. This is a weekly segment, akin to an open networking event, where Pianovers interact, jam and exchange tips. Gee Yong performed "Sometimes When We Touch", accompanied by Ong, who improvised his part.

Needless to say, regular Pianovers like Peter Prem, Timothy Goh and some others graced the occassion. It was good seeing them engaged in discussions with the other Pianovers, both old and new, and helping to build a closely-knit community of Pianovers.

A new development in this Pianovers Meetup, to everyone’s amazement, was the use of a drone to capture aerial photographs of the event. Yunos gladly contributed his services with the provision of the drone. He was also the pilot and photographer, while his brother was on hand to provide assistance. As the gathering progressed, many present were visibly delighted with the unexpected visitor as they could be seen taking photographs and videos of it with their phones.

For the benefit of those who are keen to join the weekly Pianovers, please refer to the schedule below:

Do join us, the passionate group of Pianovers, this Sunday at URA Centre!