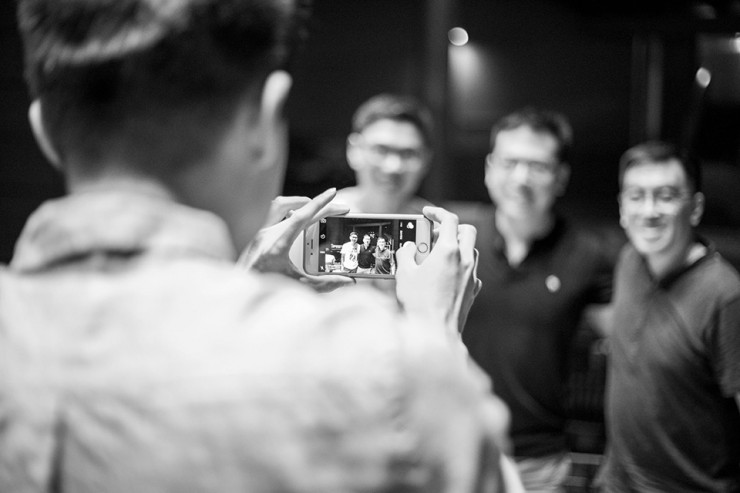 The weekly Pianovers Meetup reconvened on Sunday, 11 September 2016. Like clockwork, the props were set up at the URA Centre and supporters converged on the venue. Things fell in place quickly and very soon, the programme went into full swing. Since its inauguration in July, the weekly Pianovers Meetup, organised by piano portal ThePiano.SG, has brought together a group of passionate music lovers. Regardless of their experience in piano-playing, people connected by a common love for the piano has been coming together to jam, to learn and to bond.

This time round, things had started even before the event proper started. Early birds Jimmy Chong and Joshua Peter had started jamming on one of the pianos, and the sweet musical notes filled the vacuum of what would have been a quiet afternoon in downtown Singapore.

Once the programme kicked in, regular face Chris Khoo took over the stage and came up with his version of musical puzzles. Chris played a few pieces in sequence, in what became a medley, and invited the audience to guess the songs played, as well as the movies that these songs originally appeared in. The audience certainly had fun with the game, and they were able to accurate name the pieces. Among others, Chris performed Feather Theme (from Forrest Gump), All I Ask Of You (from Phantom Of The Opera), Sun and Moon (Miss Saigon), Love Story (from Love Story) and I Dreamed A Dream (from Les Miserables).

A first was achieved in this Meetup: Some attendees played their very own compositions.

Jimmy Chong, a Meetup regular, played two pieces, Lemon Tree (a song from Peter Freudenthaler and Volker Hinkel that was made popular in both the English and Mandarin pop scenes) and his very own composition, Lazy Kitten.

Another new composition was performed by a newcomer, Ong, who played his original piece, Waiting, in addition to the popular Pokemon Theme Song.

Busker Joseph Lim, who has attended Pianover Meetups for the past several weeks and is known for playing Mandarin pop, did not disappoint. This time, he chose to play 搁浅, by Jay Chou. Joshua Peter, who, through the influence of his father, Peter Prem, has become a regular at the Meetups, entertained with his usual Boogie Woogie style. On this occasion, he chose Night Train.

Mention has to be made of the relative newcomers. Although Junn Lim has been attending the Meetups for the past several weeks, she only started playing this time during the “registered players” segment, choosing to play When She Loved Me. Meanwhile, Anselm, who was here for the second time, played Turkish March.

Apart from the regulars and players, there were others who graced the event, too. Several tourists stopped by the venue and took videos of what would surely be fondly-remembered performances to be enjoyed back home. A passer-by, Jerry, found the gathering by chance and was so intrigued by it that he stayed throughout the event.

Following in the footsteps of the previous gatherings, the Pianovers enjoyed the session so much that they stayed well beyond 9pm, when the lights at the URA Centre were switched off. Those who stayed would have understood that it took a genuine, heartfelt passion for the one to play in the dark.

It was with sadness that Pianovers Meetup #7 came to an end. Nevertheless, everyone who was present would have walked off with yet another evening of fun, learning and encouragement. Deep in their heart, they understood that while the event had ended, the passion for the piano was still burning deep within them. They would wait with bated breath as the next weekly Meetup would come by soon enough.

I heard someone from the music business saying they are no longer looking for talent, they want people with a certain look and a willingness to cooperate.