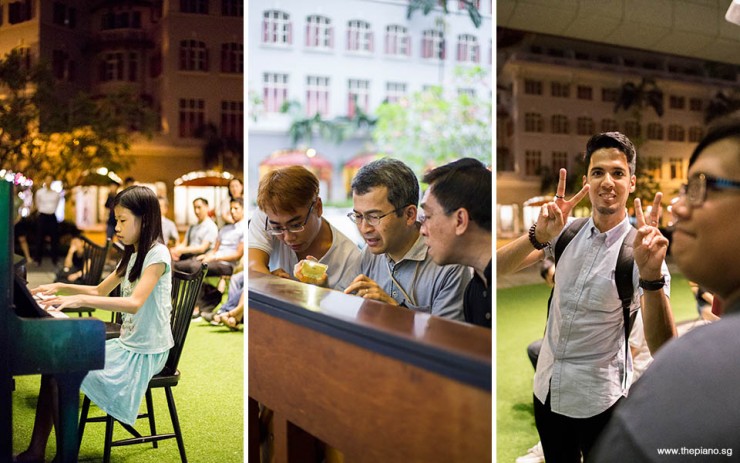 Another Sunday, another day for a Pianovers Meetup at The URA Centre! As usual, Yong Meng met up with the Pianovers at Maxwell Food Centre for a pre-meeting get together and bonding session with some local grub. Yong Meng, Bing Shao, Zafri and Kheng Poh were joined by newcomers Ashley, Jeremy Ng, Jeremy Trieu, Stella and Ben.

After the session at Maxwell Food Centre, the group consisting of regulars like Isao, Chris, Jinny, Siew Tin, Albert, Corrine, Lynn and her 2 daughters, Claris and Crystal, Catherine and her kids, Ian and Elianna, Wenqing and Gerald, Joseph, May Ling, Chong Kee, MJ, Wen Jun, John and Pat were joined by the others back at The URA Centre.

With regulars and newcomers gathered together, it was indeed a vision of the community intended for the Pianovers Meetup - to breed a close knit community of piano lovers from all backgrounds and sensibilities. Without delay, the evening’s programme got underway!

Starting off the Mini-Recital was Jinny, who played 新不了情 by 鲍比达. This piece was the theme song for the 1993 Hong Kong movie of the same title, starring Anita Yuen and Sean Lau.

Siew Tin, who plays many Chinese classics, surprised us this week with 500 Miles by Hedy West, which tells a story of a traveller who is away from home, penniless, and too embarrassed to go back. Her second piece was 海鸥 by 刘家昌.

Isao entertained us with Poésie / Greensleeves by Takashi Kako, and he shared with us how this piece connects with him, and how it paints a scene of falling snow in Hokkaido, Japan, his homeland. Undoubtedly, we were all swept away by Kako's alternative arrangement of this popular traditional English folk song.

Next was Albert who played "恋曲 1980", and "恋曲 1990", both by 罗大佑 , with the latter being more more familiar, which is also the theme song used in the 1989 Hong Kong movie 阿郎的故事, starring Chow Yun Fatt, Sylvia Chang, and Kwan Yuen Wong.

Morning Snow, Dancing and Shining by Katsuhiro Oguri, was a good complimentary piece to Isao's, and Corrine brought us yet to another scene in Japan.

Crystal played Étude Op. 25, No. 1 in A-flat major by Chopin. Recently, she won first prize in an international music competition and was invited to perform Chopin's Fantasy Impromptu Op. 66 in Carnegie Hall in New York City. Equally outstanding was her sister Claris who played Minute Waltz, by Chopin, and was the first prize winner in three international competitions and a Gold prize winner in two music festivals. She was also invited to perform in Carnegie Hall at New York City.

Another sibling pair comprises Ian who played Sonatina No. 1 in C Major, III. Vivace, by Clementi; and Elianna who played Sonatina Op. 20 No. 1, II. Rondo, Allegretto. Tempo di Minuetto by J.L. Dussek. Seeing the four children in a row perform with such confidence and passion brought unspeakable warmth to the hearts of everyone fortunate enough to hear them play!

Chris, a regular at Pianovers Meetups, played a Medley of 我家在那里, 夜来香, and 上海滩, which was a sharp contrast to his usual pieces. In fact, with 35 pieces under his belt, this was his first performance in the Meetup with a Chinese piece, and it was well received by everyone.

Wenqing played Fly Me to the Moon by Bart Howard, with a Bossa Nova flavour. Originally titled "In Other Words", this jazz standard has found its place in the US-based Songwriters Hall of Fame in 1999 as a "Towering Song”.

Joseph played Für Elise by Beethoven, and Yong Meng took the opportunity to show a small snippet of trivia about The Mysteries Behind Beethoven’s Für Elise, that Beethoven probably never wanted this version to exist, and would have preferred the 1822 version instead. A popular Baroque piece, Canon in D by Johann Pachelbel, was also played.

Ashley, a newcomer, played "Sonatina in G Op. 19 No. 1", J.L Dussek. It was heartening to see someone playing in the Mini-recital on her very first visit! Ashley received a good round of applause from everyone, thus concluding the Mini-recital.

During the Open Segment, a group photo was taken first. Everyone was chatting and having a blast at the meetup. Chong Kee was seen engaging with the kids of the group, while Zafri and Wen Jun bonded over their mutual love for Anime. Jeremy Ng was jamming on the piano with Ashley. Newcomers Soh Cheng and her two sons, Shawn and Sherman were all amazed at the energy and passion seen with the group, and were excited to let Yong Meng know about coming back and playing something the next time. Jeremy Trieu, who was in town for a couple of months, was delighted at how friendly people were in the group.

All in all, it was a pleasant night for all who attended. Even though it has been nine months since the very first Pianovers Meetup, it is nice to still see music lovers and piano enthusiasts from all walks of life converge at a common location and bond. Till the next one!

Music television is all about the media-oriented version of what it is to be a rock star; it's not about what Bob Dylan or Jimi Hendrix were about - which included great images, sure, but they had spiritual and political and revolutionary content, too.