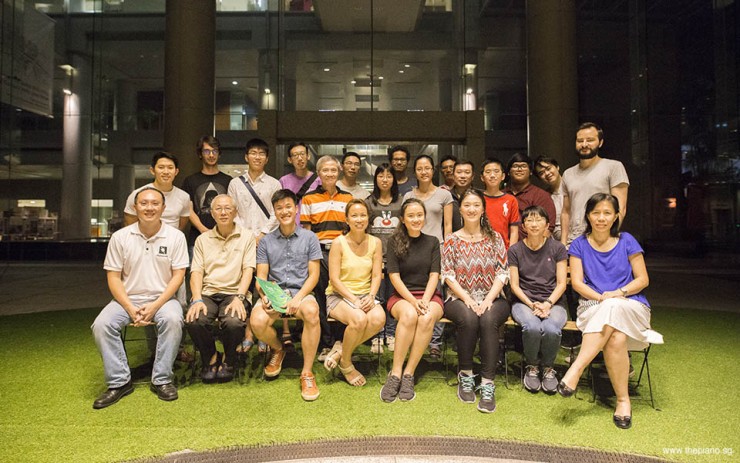 The meetup this week saw a plethora of piano lovers and musicians from all walks of life, as well as from all corners of the island. Starting with the pre-meetup dinner, we had a handful of first time Pianovers: Zafri, Alex and his sister Angeline, Wei Guo, Yoko and Cenna. Returning Pianover May Ling also joined Yong Meng and the group at Maxwell Food Centre.

Back at The URA Centre, Albert, Siew Tin, Timothy, Mitch and Vanessa, Gregory and Raymond, MJ, Wen Jun, and Dominic were already there waiting for the event to begin. Siew Tin and MJ even brought along some new friends, Kimberly and Cheralyn (mother and daughter), and Natalie. They were joined by Douglas and Thibault Forget, a passerby who decided to stay.

Once everyone got settled in, Cenna kicked off The Registered Players Segment with a beautiful number, "Clair de Lune" by Debussy. Inspired by Verlaine's poem Clair de lune, or "moonlight" in French, the song is the third and most famous movement of Suite bergamasque, in D♭ major. Belonging to the era of French Impressionism, it was written in 9/8 meter, marked andante très expressif, and played mostly pianissimo.

Vanessa and Mitch played Bubble Bobble by Tadashi Kimijima from the arcade comical action platformer video game by Taito. Vanessa scored a first in the Meetups by performing on a Pianica, before switching back to the piano! Released in 1986, the game required players to embody characters of the twin Bubble Dragons Bub and Bob in order to navigate obstacles, hurdle through challenges and collect power ups as they go.

Albert played "幸せの一番星" by Kyōhei Tsutsumi (筒美京平), and "月下佳人" (The Beauty Under The Moon) by 姚敏. The song “幸せの一番星” was used in the Japanese Drama 寺内貫太郎一家 (Terauchi-Kantaro Triple-Generation Family), and as the theme music in the movie by the same name. The singer of "月下佳人", unbeknownst to some, had another famous singer sister, 姚莉. The only surviving member of the Seven Great Singing Stars of Shanghai (七大歌星), she is 95 years old. Though many people are unfamiliar with her name now, her singing group was a household name back in the 1940s.

Known for her selection of Mandarin classics, Siew Tin dazzled us with 我有一段情 by 梅翁.

Brought by his parents Kee Lin and Maria, George played a famous piece by Yiruma, Kiss The Rain. Coincidentally, Yiruma had just played a concert at The Star Theatre in Singapore the day before.

Alex played Kirameki by Japanese composer Masaru Yokoyama. This piece in particular was the emotive backdrop for the ending of Japanese anime “Your Lie in April”, one of the popular piano themed Japanese anime.

May Ling played On Golden Pond by Dave Grusin from the movie “On Golden Pond”. According to IMDB, the plot of “On Golden Pond” revolves around the character Norman, his estranged daughter Chelsea and her boyfriend’s son. An unexpected turn of events at the Golden Pond lead to Norman and his wife agreeing to care for the son of Chelsea’s boyfriend, and a beautiful relationship blossom between the characters of the movie.

The second piece played by May Ling, Norwegian Wood by The Beatles, was speculated by writer Philip Norman that it was about an affair John Lennon had with either close friend and journalist Maureen Cleave, or Sonny Freeman. Though it was never confirmed by Lennon with whom he had an affair with, the opening couplet "I once had a girl, or should I say, she once had me” certainly leaves room for imagination.

Next up was Zafri, who impressed with Fairy Tail Main Theme by Yasuharu Takanashi from the Japanese manga, “Fairy Tail”. The manga follows the adventures of a teenage wizard, Natsu Dragneel in his search for the dragon Igneel.

Wen Jun played Flower Dance by DJ Okawari from his 2011 album Kaleidoscope. The song is a remix of the original the background music used in the dialogue of 1960 movie "Assignment: Outer Space".

Dominic played "A Story From Long Ago" by Martha Mier to end The Registered Players Segment. Martha Mier is known for composing several songbooks that are still used till this day in various musical institutions. Most famous is "Seventh Street Blues", found in her songbook Jazz, Rags & Blues Book 1, followed by "Jackson Street Blues”, used in the Associated Board of the Royal Schools of Music 2007-08 syllabus as Piano Grade 5 Piece C:1. Lastly, her "Romantic Impressions" solo piano books contains pieces for beginners to advanced players alike.

During the Open Segment, the group took photos, shared anecdotes of their week with each other, and jammed out on the pianos. Vanessa and Mitchell also shared the wonderful piece of news that they are planning to get married in May 2017. The sincerest congratulations to the lovely couple from everyone at ThePiano.SG!

Another highlight of the night was when Alex and Zafri took the stage. Crowds were forming around and behind them. Zafri's innovative octave play attracted a lot of comments on Facebook, as he did it with a 1-4 (thumb and 4th finger) instead of the conventional 1-5.

Timothy made a return after a long hiatus from the group and was seen having a good time jamming with May Ling. On top of that, it seemed like a small group had formed, discussing the relevance of piano education, kids, parents, school in Singapore. Everyone returned home after another fulfilling and music-filled Sunday with The Pianovers Meetup.

Music's not like becoming a doctor, who can walk into a community and find people who need him.