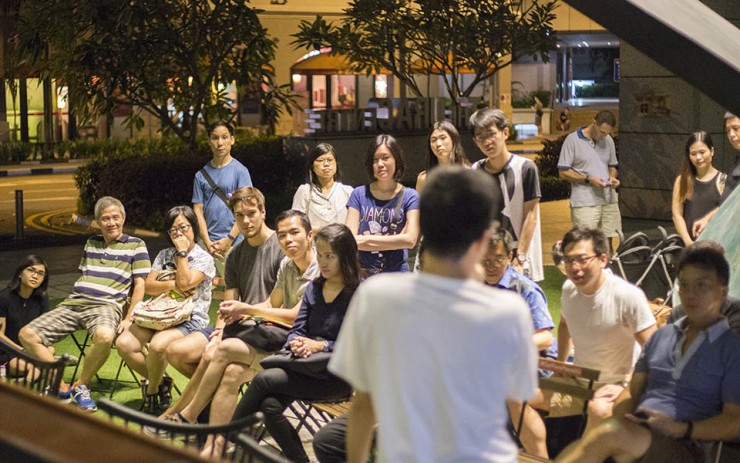 Every Sunday, at 6:30pm, the two refurbished, upright pianos at The URA Centre receive a big group of visitors. These passionate piano lovers – affectionately known as Pianovers - gather to meet, gather and bond over piano playing. This weekly event, which started in July 2016, is organised by ThePiano.SG and is meant to offer a platform for pianists to come together to perform and bond. This Sunday’s session was the 41st one and the number of attendees has grown over the months! Some Pianovers share the benefits and joy they have experienced with their families and friends and they too, appear at subsequent Meetups!

An hour before the official start of the Meetup, some Pianovers met to have dinner at the Maxwell Road Food Centre. Group dinner is an optional part of the Meetup, however, we appreciate those who come early and network over a delicious dinner. Thank you, Pat, Zafri, Chris, Jonas B, Wayne Cheung, Cate Lin and Timothy Goh, for joining us this evening. Jonas, Wayne and Cate were new to Pianovers Meetups, but they came early nonetheless! Wayne would be playing later that evening - kudos to him for performing on his maiden visit!

An hour quickly passed and by now, more people had gathered at The URA Centre. Ben Tang, Jennice, Ploy, Lucerne, Wendelin, Jin Li, Adi, Kelvin and YT joined us. So did Jinne, Sivashangharan and Sophia, who brought their families with them.  Except for Ben, Jennice and Jin Li, these were attending Pianovers Meetup for the first time. This week, we had a big group of newcomers!

To get the evening going, Sng Yong Meng, ThePiano.SG’s Founder, gave all present an introduction of the weekly Meetup. As dusk fell and the lights were turned on, the first formal item on the agenda arrived. This was the Mini-Recital. In this session, conducted in the warm evening glow of The URA Centre’s ceiling lamps, Pianovers perform to all present in pre-registered slots.

In this session’s Mini-Recital, the first person to perform was Yeo Ming. It was her first time at the Meetup, but that didn't stop Yeo Ming from taking to the stage with Flower Dance by DJ Okawari which is compiled into his 2011 album Kaleidoscope. The song is a remix of the original background music used in the dialogue of 1960 movie "Assignment: Outer Space". A brilliant start to the Mini-Recital!

Yuxin stepped up next to perform "September in the Rain" by Harry Warren and "Für Elise" by Beethoven. A small snippet of trivia about The Mysteries Behind Beethoven’s Für Elise was shared - Beethoven probably never wanted the version popularly played today to exist, and would have preferred the 1822 version instead. Neither was there a person by the name "Elise"!

This was followed by regular Pianover Albert's sharing of the story behind "竹田の子守唄 Takeda No Komori Uta (Takeda's Lullaby)", and his performance of the same. Takeda No Komori Uta tells the story of a young girl as she sings about her family’s life as burakumin (hamlet people), a community in Tokyo that faced social discrimination owing to their professions. Hamlet people were considered low on the social ladder as they worked in jobs tainted with death, like executioners, butchers and undertakers. Following this piece, Albert performed a second, more cheerful piece, "我找到自己" by 刘家昌.

Chris brought us to Europe's second-longest river with The Blue Danube, famously performed by Johann Strauss II and first written in 1866 as a song, The Beautiful Blue Danube, for a carnival choir. Because Austria had then just lost the war with Prussia, this song was written in a satirical style. Interestingly, the original title was also a reference to a poem about the Danube in Baja in Hungary (the poet Karl Isidor Beck's hometown).

Piano Teacher Jennice brought two students here today. Sivashangharan delivered 3 titles - Hungarian Dance No. 5 by Johannes Brahms, Sonatina in C major, Op. 36 No. 1, Allegro by Clementi, and Moody Prawn Blues by Franklyn Gellnick. Hungarian Dance No. 5, although credited to Johannes Brahms, was in fact based on the csárdás by Béla Kéler titled Bártfai emlék which Brahms mistakenly thought was a traditional folksong.

Sophia, Jennice's other student, continued with two numbers - Canaries by Sarah Watts, and Dans la foret lointaine. In Pianovers Meetup, we welcome piano teachers who bring their students. Exposure to platforms outside the classroom is something we value and appreciate. Learning should be holistic and at ThePiano.SG, we appreciate teachers like Jennice who make the effort to bring their students to Pianovers Meetups!

Zhiyuan performed Sonata in B flat K570, 3rd movt, Allegretto by Mozart, and Sonata No. 30 in E major Op. 109, 3rd movement, Theme and Variation 1 by Beethoven; with the former being one of his performing pieces for his DipABRSM piano exam on the coming Tuesday. We would like to wish him all the best!

Newcomer Wayne introduced himself with Intermezzo Op. 117 No. 1 by Johannes Brahms. The 3 Intermezzi is one of the last four groups of piano pieces Brahms composed. Although the love story between Brahms and Clara Schumann has always been a mystery, she nonetheless inspired the hopelessly-infatuated Brahms to create this piece.

Ending the Mini-Recital was Zafri's performance of Unravel by Tōru "TK" Kitajima, from the Japanese Anime - Tokyo Ghoul. Since Zafri joined Pianovers Meetups, he has progressed in his music playing. We Pianovers are very proud of Zafri's progress over the months we have known him!

The last item for the evening was the Open Segment. Here, all Pianovers present could play freely. As some people jam on the two pianos, other Pianovers could chat, compare notes and bond with one another. Creating an inclusive community of passionate Pianovers with a heart for sharing is one of the Meetup's goals!

Before leaving the premises, Pianovers took a group photograph. Pianovers Meetup #41 had ended, however, Pianovers are already looking forward to Pianovers #42. See you all this Sunday!

If people take anything from my music, it should be motivation to know that anything is possible as long as you keep working at it and don't back down.