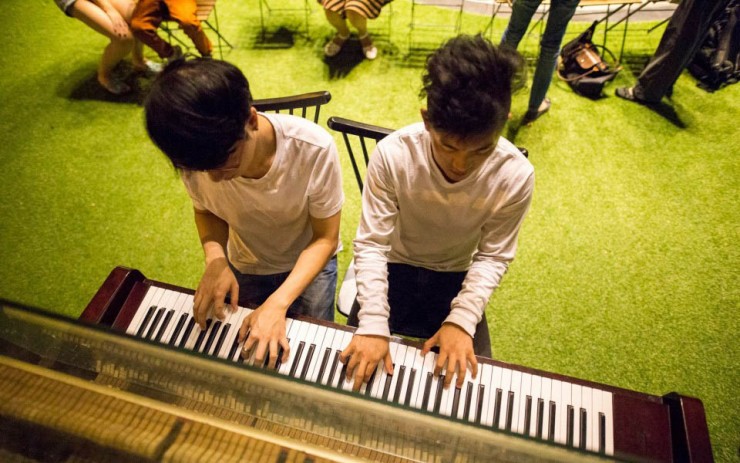 The phrase “There’s no place like home” has certainly rung true for our Pianovers this week, being back at the familiar URA Centre after the first indoor meeting held by the gracious Goh Zensen at his home last week. Despite the island heat and the roar of passing traffic, Pianovers found the open space comforting. With all the friendships and bonds that have been formed and continue to be formed through the meetings, the Pianovers Meetup has become more like a gathering of kith and kin to some of us. With each passing week, we are introduced to fresh new faces, this week being no exception. Luke Goh, Audrey, Rick Choy and family, Bryan, Hui Jie, Patsy, Dominic and Wendy were part of the many that were present at Sunday’s meetup.

Deciding to get a head start on all the delicious grub, May Ling and her friend Audrey were already at Maxwell Food Centre, much to the surprise of Yong Meng, Patsy and Hui Jie. Joined later by Chris, the group enjoyed a dinner of local delights before heading back to the Pianovers’ usual spot at The URA Centre.

An old friend and bunk mate of Yong Meng during his army days, Rick Choy, brought his 4-year-old daughter, Choel, along to the meeting, hoping to inspire and excite her to learn to play the piano. Peter, whom some of you might remember from 3 weeks ago also made an appearance after taking a short break. It is always delightful to see a familiar face again. Welcome back!

As usual, the registered players segment filled the air with soothing melodies as the Pianovers took turns to impress us in the crowd.

First up was Barrick, who was once shy about playing in front of others but now dazzled us with a version of River Flows in You by Yiruma. This is an advanced song for his age, but it is proof of how far he has come. The shy boy from Pianovers Meetup #8 is no longer – something his mum May is incredibly proud of.

Joseph, known for his covers of Mandarin pop songs brought us back in time to 2002 when 梁靜茹, Fish Leong, sang 分手快乐. May Ling played a classic, the Theme from “Romeo and Juliet” by Tchaikovsky. Yiruma seemed to be a popular choice that night, with another rendition of his pieces, Kiss The Rain played by Gee Yong, a regular Pianover though it was his first time playing in the registered segment. The Pianovers Meetup has no doubt motivated many to shed their shyness and come forward during the registered players segment.

The next number was by newcomer Hui Jie, who covered the popular song You Raise Me Up by Rolf Loveland (from Secret Garden), a third in the history of all the Meetups. It is the song with the most number of plays so far. Another newcomer, Patsy, delighted us with a rendition of the simple yet classic Oh My Darling, Clementine. Patsy had taken a break from music and that night was the first time in a long time she has returned to performing. Jimmy played a medley of "Can't Take My Eyes Off You" and "Close To You (from Long Vacation)" from the 1996 famous Japanese TV series.

Chris brought us a signature piece, Ballade Pour Adeline, by Richard Clayderman (written by Paul de Senneville and Oliver Toussaint as a tribute to Paul’s newborn daughter, Adeline, and saw auditions for more than 20 hopefuls before Richard Clayderman was picked). The night ended with one of the most interesting open segments during the meetups yet. We were treated to the stylistic free jams by the improvising pairs Peter and Bryan, as well as Jimmy and Luke.