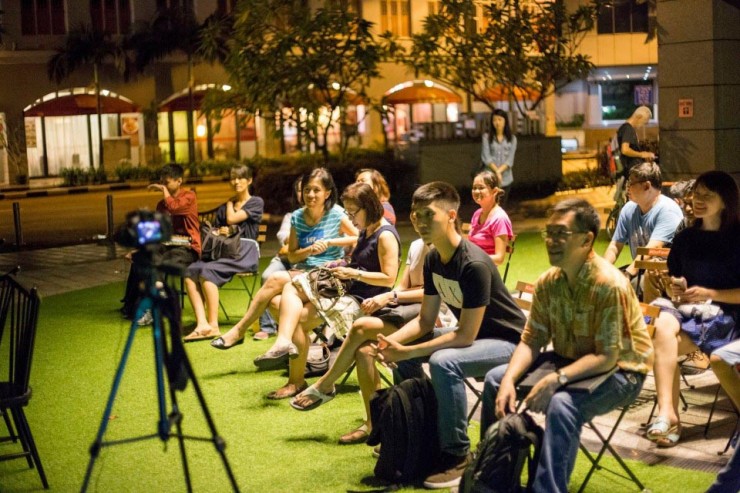 The Pianovers returned to The URA Centre again this week for the 16th Pianovers Meetup. After the meeting last Saturday at Orchard Central, it was back to the heart of the city, with the bustling of weekend excitement. Many new faces showed up to the meeting this week, faces like Anthony MB, who had been in engagement with us on ThePiano.SG Facebook Page, Samuel and his friends, Lian Ong and Geoff Tan, Xuanying, who was invited by Junn, as well as Alicia and Junhao.

As usual, Yong Meng led a small group (Samuel, Lian, Alicia and Junhao) to Maxwell Food Centre for a pre-meetup dinner. May Ling and Chris joined them soon after. Pianover Samuel was new to the group, but has known Yong Meng as a friend for a while now. He brought along his friend, Lian, who was scheduled to play during the Registered Players segment, as a gesture of friendship and support for Yong Meng and his work. Newcomer Alicia is also a seasoned pianist and piano teacher. Junhao is currently serving his nation, but is due to complete his national service very soon.

Back at The URA Centre, we were surprised to see that the position of the pianos had been moved. The familiar “To:” piano was repositioned on the left of the beautiful clear “Re:minisce” piano, while the “Re:minisce” piano remained in its original position.

Another thing we were surprised by when we arrived at The URA Centre was the number of Pianovers that were already present and eagerly anticipating the start of the event. Amongst them were returning Pianover Peter Prem, who brought his daughter, Jeslyn, and his son, Joshua. It is always heartwarming to see Pianovers return after weeks of being “missing in action”.

Veteran Pianover Chris dazzled us again with Send In the Clowns, by Stephen Sondheim. To accommodate his playing, Chris playfully stuck his scores onto the transparent acrylic covering the “Re:minisce” piano.

Lian delighted us with a classic and a popular tune with the Pianovers, Somewhere Over The Rainbow. Junn entertained us with a piece that was slightly more current, "Christmas Must Be Something More" by Taylor Swift, also sharing with us how much she loves the lyrics of the song.

Next up was Jeslyn, who delighted us with two numbers. One was Marienwürmchen by Johannes Brahms, and the other was an upbeat number, Dschinghis Khan, played as a duet with her father, Peter Prem; a fantastic return after taking a break from the Meetups.

Joseph played 心有独钟,  bringing to life a piece from 1997. The Christmas mood seemed to be in the air as the group was treated to yet another Christmas themed song by May Ling, playing "The Christmas Song", by Bob Wells and Mel Tormé.

The second duet of the night was by Alicia and Junhao playing 四手聯彈, which quite aptly, translates into “a four-handed play”. Alicia and Junhao each played a solo piece as well, Sundial Dreams by Kevin Kern and Time Travel Theme (from the movie "The Secret"), by Jay Chou.

Jerome delighted us with 偏偏喜欢你, bringing up feelings of nostalgia for those who grew up listening to the song, also effectively concluding the Registered Players Segment in high spirits.

Many of the Pianovers who were present on Sunday were incredibly supportive, buying Polo shirts from an appreciative Yong Meng. Barrick’s mum was even generous enough to offer up her change in exchange for group drinks during future Meetups.

The meeting closed with the Open Segment that included some Harmonica improvisations by Bryan. Even a passing tourist from Hong Kong joined in for two full hours! Have a look at the photos taken from the night to find out more and we hope to see more of you at the Pianover Meetup #17!

That was when I realised that music is the most profound, magical form of communication there is.