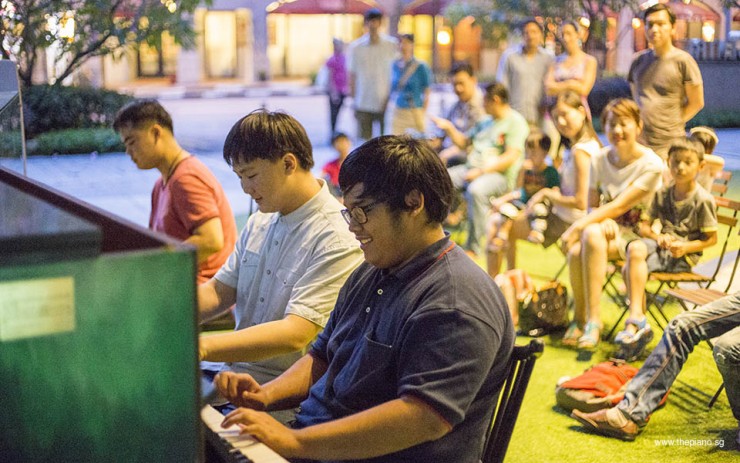 It is that time of the week again, where Piano lovers across the island get together for a fun filled Sunday evening! As usual, those that arrived earlier headed to Maxwell Food Centre for a pre-meetup dinner and catch up with Yong Meng.

This week, we had several new faces join the group like Ace, Wei Cheng, Deni, Hak Meng, and Darryl, brought along by last week’s attendees Zafri and Alex. Chong Kee and the lovely family of Wing Wa, Hui Hui, and their two children Wan You and Wan Yi came for the first time.

Many regulars like Jerome, who doesn’t seem fazed by his injury, Gee Yong, Siew Tin, MJ, Jin Li, Desiree, May and Barrick (mother and son), Vanessa and Mitchell, Chris and his mum (newcomer), György, Albert, Cynthia and Yu Tong (mother and daughter), and Chan also showed up.

The Registered Segment began promptly with Chong Kee playing Etude Op. 10 No. 12 ("Revolutionary Etude") by Chopin, written in 1831. It was the last of his first set, Etudes Op.10 and was dedicated to a friend, “dedicated "à son ami Franz Liszt”. The song appeared around the same time as the November uprising. It was noted that the writing process was an emotional whirlwind for Chopin, as it was also about the time the Polish revolution was concluded by a titanic defeat. He was quoted saying “All this has caused me much pain. Who could have foreseen it!”. However, one of Chopin’s most outstanding pieces, "Revolutionary Étude" was created through enduring this time of turmoil.

Albert played "Summer Kisses Winter Tears" by Ben Weisman, Fred Wise, Jack Lloyd, from the album "Elvis For Everyone" (1965) and "Flaming Star/Wild In The Country/Follow That Dream" (1995). The piece was later covered by Julee Cruise, and was also written as a Chinese piece titled “多少柔情多少泪”. Albert followed the tearful piece with "Pulau Bali", a Traditional Indonesian song.

Siew Tin stole our hearts once again with her selection of Mandarin Classics, this time with 望春风 by 邓雨贤 . First sung in 1933, it was later awarded “Most Popular Taiwanese Song” in 2000 during the “歌謠百年台灣” (“Taiwanese Songs Over The Years”, a competition that attracted 220,000 entries) and “百年十大金曲” (“The 10 Greatest Taiwanese Songs”, another song competition).

Next was Alex, who played Kisetsu wa Tsugitsugi Shindeiku by Hiromu Akita (amazarashi) from the ending theme of Tokyo Ghoul anime series Season 2. The game exists in an alternate reality where flesh-eating ghouls live alongside humans in order to evade authorities. The song was also released on February 8, 2015 as a single by the same title.

For the first time in Pianovers Meetups, His Theme from Undertale by Toby "Radiation" Fox was undertaken as a six-hands piece by Zafri, Ace, and Alex. Incidentally, the Guiness Word Record of 18 musicians concurrently playing the piano (link is external) is held by Angela Montemurro and her 17 students in a performance held in Italy in 2014.

Ace played a Medley of “Unravel” and “His Theme”. Deni played Eyes Nose Lip by Teddy, DEE.P, and Rebecca Johnson, performed by Taeyang. Unlike other Taeyang songs that are upbeat and easy to dance to, “Eyes Nose Lip” draws the focus of the audience to Taeyang’s deep emotional vocals with its slow tempo R&B accents.

Gee Yong received a resounding applause from the audience after playing his own rendition of Bogoshipda (Miss You) by Yoon Il-sang, from the 2003 Korean television series “Stairway to Heaven”.

This was followed by the generosity and charisma of Pianover Jerome, who entertained the group two weeks ago with a guessing game. It looks like his accident has not dampened his spirit, as he was back again this week with a second round of the guessing game. This time, he had two $50 vouchers for a night at Holiday Inn available to those who could guess the pieces he played – a Medley of "Reality", and "Alone Again (Naturally)". More details about Jerome’s guessing game will be posted on ThePiano.SG Facebook Page.

Vanessa and Mitchell, who are due to be married in May, delighted the group with Cantina Band from the popular movie franchise “Star Wars”. The song came complete with accordion parts, played by Vanessa herself. She switched it up with a Pianica last week (link is external)! From the album, “Star Wars and Other Galactic Funk”, the single recorded by Meco hit number one on the Billboard Hot 100 on October 1, 1977, holding on to the spot for two weeks and peaked at no. 7 on the UK Singles Chart, where it remained for nine weeks. Having sold two million units and being the only one ever to be certified Platinum by the Recording Industry Association of America, it is the biggest-selling instrumental single in the history of recorded music till this day.

Newcomer Wan Yi played Minuet Dance, to which her younger brother Wan You eagerly wished to join in on. His enthusiasm for piano and music was so apparent that father of the two, Wing Wa, had to hold him back.

György played "To Zanarkand" by Nobuo Uematsu, the main theme of Final Fantasy X, a popular role-playing video game developed and published by Square Enix. Well known in the video game industry for his work in the Final Fantasy series, Japanese composer Nobuo Uematsu (link is external) is also often referred to as the "Beethoven of video games music”. He has appeared a total of five times in the top 20 composers during the annual Classic FM Hall of Fame.

Ending The Registered Players Segment was Chris, who played Mai Phen Rai (Never Mind) by Ken Low. The song is from the famous locally produced Chang & Eng (link is external), a musical revolving around the lives of real life siamese twins Chang and Eng (link is external), who lived their entire lives, from Siam to New York, literally attached at the hip. The story ends with the twins settling down in North Carolina with their wives and later recalling the words their mother told them as children: “Mai Phen Rai” (Never Mind) on their deathbeds.

After the closing of The Registered Segment, the pianovers opened the subsequent part of the event with a group photo. Smiling faces were all around that night as the open segment saw a range of different sensibilities stepping up to the pianos. Most interesting was the number of teenagers that were present, most being 15 – 19 years of age, including Alex, Zafri and his small group of friends. Apart from the teens, it is always heartwarming to see the Pianovers Meetups attended by people from such differing backgrounds and ages. From the young to the wise, the Pianovers Meetup is certainly a space where one can come to enjoy the pleasures of musical entertainment.

My debut album, 'Forget the World,' is all about not listening to the negativity around you and to continue to do what you love, no matter what people think. I love what I do. Dance music is my passion, my life. There is no greater feeling than being one with my fans, partying to the music we love.