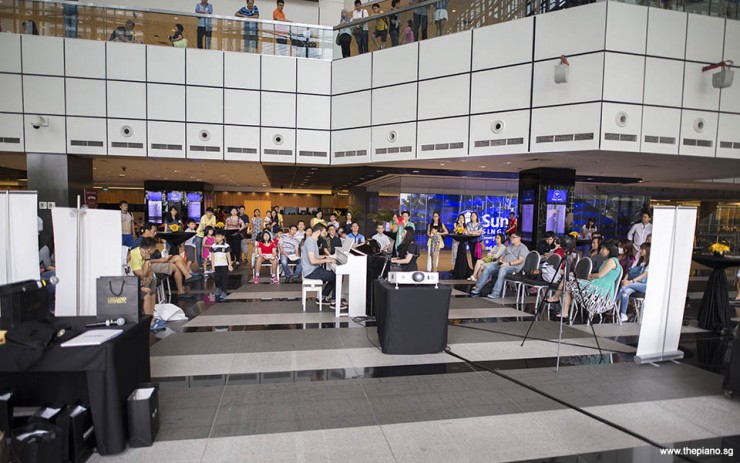 ThePiano.SG and Casio came hand in hand to bring to piano lovers all over the island an exciting weekend called The Piano Jamming Party! Held over 2 days on the 10 and 11 Dec, the usual weekly Pianovers Meetup at The URA Centre was at Suntec International Convention and Exhibition Centre, Level 3.

Being that it was our second and last day at the convention centre, the 20th Meetup certainly drew a large crowd, exceeding the number present the previous day! We saw many familiar faces, like Chris, Gee Yong, Zensen, Jimmy, Vanessa and Mitchell, Cynthia and Yu Tong, Anthony, Shu Wen (a piano teacher who brought along some students), Isao, May Ling, Audrey, Junn and Dorothy as well as Yayoi (who had just joined us on the first day).

The meeting began with Yong Meng sharing with the group his passion for the Meetups, as well as a brief digest of the events that took place during the Pianovers Sailaway. This Meetup saw a record number of 20 registered players, and a total of 23 pieces performed!

Vanessa and Mitchell started the segment with a bang, playing several variations of the Tetris Theme from the classic game, Tetris.

Wang Yi Fan played the Mandarin song 有你的地方是天堂. This was followed by another popular classic It's a Small World, the song for the "It's a Small World" attraction at Walt Disney Parks and Resorts worldwide. Next up was Brandon Koh, who played 月亮代表我的心 (The Moon Represents My Heart), a piece made popular by 邓丽君 (Teresa Teng). Aaron Koh tested out his musical and performing chops for the first time with Sing Your Way Home, which received a big applause from the crowds. This was a very good try for Aaron, who had only been learning the piano for a while now. Wang Yi Fan, Brandon Koh and Aaron Koh are piano students of Yang Shu Wen.

Isao dazzled the crowd again with two numbers, utilising his “special weapon” from the previous day – a USB drive with backing instrumental accompaniment. He played Silent Night and Autumn Leaves, the latter being a Jazz piece by Hungarian-French composer Joseph Kosma, covered by Eric Clapton in his album Clapton (2010).

Chris played Climb Every Mountain, by Richard Rodgers from the musical The Sound of Music. The piece is meant to inspire and push people to be bold when it comes to achieving the height of their dreams.

May Ling played the evergreen "The Entertainer" by Scott Joplin, who was an African-American composer and pianist well known for his ragtime compositions, and was dubbed the "King of Ragtime Writers”. As May Ling performed this classic piece, Chris could be seen following the rhythm by playing concurrently on his imaginary keyboard.

Junn played Yasashisa, by Yukie Nishimura, a prolific Japanese pianist and composer, whose piano style is light and easy on the ears.

Gee Yong played 上海滩, to which a Meetup regular Chee Beng once said “I would never have imagined a classic Mandarin song could sound so attractive with piano solo!”.

Yayoi delighted us all with a sentimental and romantic rendition of S.G by "ADAM at”, a Japanese Band.

This was followed by Gregory with 想你的夜 by 关喆, a piece with romantic background. 关喆's songs are mostly about his personal experiences. This piece in particular is one about lost love. When he moved to Beijing in order to advance his singing career, his then relationship fell apart due to distance and hectic schedules, but also inspired this beautiful piece.

Steven played First Love, by Utada Hikaru, which is the theme song for the Japanese Drama - Majo no Jōken (魔女の条件) ("Terms of a Witch”).

Sixuan played Kataware Doki, by Radwimps, from the movie “Kimi no Na wa (君の名は)”, released in Singapore early November. The version that Sixuan performed had bits of Yiruma's “River Flows In You” incorporated into the number.

Wen Kai played Pure White, by Vanros Kloud, popularly known as just "V.K". This piece is widely considered to be the hardest song in the first edition of the music video game “Deemo" created by Rayark Inc.

Andrew Chin and John performed two songs – We Wish You A Merry Christmas and New York, New York, both with John singing. They ended the performance by cheekily inviting Chris to do his leg kick, in an imitation of the original New York, New York dance.

The Registered Segment ended with a sweet surprise planned by Yong Meng for Audrey, whose birthday was 2 days before the next Meetup on the 18 Dec. He invited Zensen to play the Happy Birthday Song, while a beautiful Strawberry & Hazelnut Chocolate Tart with an indulgent chocolate crust and topped with berry goodness and rich hazelnut praline was handed to her. What a lovely way to end the segment!

The Open Segment saw a conglomeration of talents that really anchored the definition of a Piano Jamming Party. Gee Yong, Zensen, and Gregory had fun with 月亮代表我的心. Yu Tong and Gregory played the piano and Cynthia sang 记得. Chris was the centre of attention for a family of eight kids, who gathered around while he played. Some of the other songs that were played during the Open Segment were Somewhere Over the Rainbow, with John and Zensen playing and Chris singing, and Sometimes When We Touch with Gee Yong and Zensen. We even got a picture of some of the Pianovers (May Ling, Audrey and Gee Yong) who turned up unplanned in matching green outfit!

The fun did not cease at the end of Open Segment. After the event, May Ling, Audrey, Anthony, Chris and Yong Meng, took the Meetup a step further with a communal dinner, sharing life experiences, laughter and of course, delicious food.

I quit high school on my birthday. It was my senior year and I didn't see the point. This was 1962, and I was ready to make music.