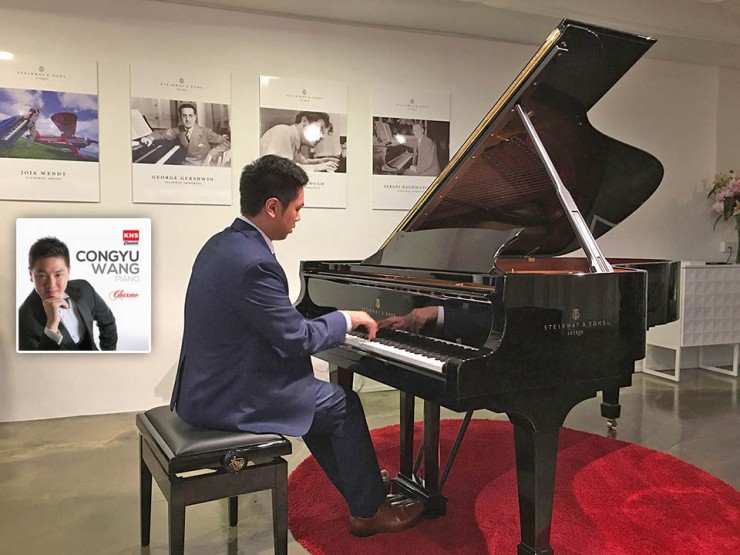 13 November 2015, Singapore — Young Steinway artist, Congyu Wang, returns to his hometown in Singapore for the last stop of his Asia Tour 2015, after performing in Malaysia, Indonesia and Thailand. The classical pianist will be debuting his new CD release, Charme, which features works by the 20th century French composer, Francis Poulenc. Congyu Wang will be playing an evening recital at the Alliance Francaise and will perform pieces from Charme.

"I've known Congyu for four years, and have seen his development along his journey. His passion for music and his determination to excel have helped him to realise his dreams, first in becoming a Young Steinway Artist and now releasing his debut album. His performance speaks to the audience- a true virtuoso of our time. We would like to congratulate him on his achievements, "said Celine Goh, General Manager of Steinway Gallery Singapore.

Congyu Wang has earned a reputation for delivering virtuosic performances of extremely demanding repertoire. Described by conductor-pianist Francois Weigel as "a young pianist who can connect brilliant virtuosity to the most delicate poetry", his vast repertoire includes 30 piano concertos, along with the complete solo piano oeuvre of Chopin and Poulenc. Highlights of some of his performances include festival appearances at Château de la Verrerie (France), Ernen Music Festival (Switzerland), the Geza Anda Piano Festival Masterciasses (Berlin), the International Isang Yun Academy (Paris), the Mozarteum International Summer Academy in Salzburg, and the Aurora Chamber Festival in Sweden. As an active chamber musician he performs with violinist Benjamin Brandeleer-Ligier, with whom he has founded the Francis Poulenc Duo.

Congyu Wang was conferred as a Young Steinway Artist in 2013 at the Steinway Gallery Singapore. The Young Steinway Artist programme was developed by Steinway & Sons to reach out to young pianists at an early stage in their burgeoning careers and to continue its role of nurturing talent and promoting the art of piano playing.

Congyu Wang Piano Recital — Featuring works by Francis Poulenc will be held at the Alliance Francaise on 15 November from 7.30 - 9.30 pm. Charme will be on sale at the event for S$25. Event tickets are $28 and can be purchased through Steinway Gallery Singapore. For further enquiries, email admin@steinway-gallery.com.sg or call 6838 0525.

About the author
Steinway Gallery Singapore

I'm very shy and awkward. I think the best thing is to embrace it. It's about accepting who you are and what you want to become and knowing all that you've got to work with, whether it's good or bad. My music was the only place I could be me for the longest time.